Spruiking …..a word that appears regularly in the excellent Sydney Morning Herald. I think it means ‘spouting in a sort of holding-court way’.

If it does well I am about to spruik, and if it doesn’t well, it should.

It had to be William Street. After all I had just left King street and the Australian Sunrise Lodge and here I was heading for the centre of the City and William Street to complete an unlikely and fairly disturbing brag hand. King …William …Lodge! Not bad for a Tim in his first week in Australia!

I suppose like all ex-colonial cities and countries Sydney and Australia has its fair share of echoes from a cap-doffing past. George Street, Pitt Street, King Street, Victoria Street, Regent Street, Elizabeth Street to name but a few. But of all the ones possible, my hotel (rough description – think Belgrove hotel wae clean curtains) has to be on the street named after the great pillock of the Boyne.

Still let’s be rational here, they’re all just names and it would be childish in the extreme to think that history’s thin thread vibrates down through the centuries and exerts still a trace of the glorious revolution and its inglorious anti-hero through such a mundane object as a street name or whatever!

After all we’re not really paranoid are we? We really don’t seriously avoid coincidental names, colours or descriptions just because they may have some tangential relationship with you know who. No way are WE like THEM!

So who cares that the most depressing, pollution soaked, pot-holed, crime-infested street that my hotel happens to be on is called after some big feather-hatted woose, riding a white horse! Not me that’s for sure.

Anyway, I’m moving to the Leisure Inn on Regent Street on Sunday – God I can’t wait. After all it is nearer to Paddy’s Market! Yes!, Sydney has it’s very own Paddy’s Market and not an Irish accent to be heard, unless it is the Chinese branch of the Ilish Diaspola. For Paddy’s Market is in Chinatown – the biggest Chinatown I have ever seen, in fact it is so big it is actually bigger than China! Also, don’t even try and equate this Paddy’s Market with the one and only (soon to be defunct) version which sits in the Briggait. This one is modern, air-conditioned, clean, controlled and regulated. It does however still have bargains, none of which you either need or want, more along the lines of an-upmarket Barras rather than the fire sale of someone‘s last few possessions in an attempt to keep the tally-man from the door.

And so I will be moving closer to what I regard as my spiritual calling – buying stuff cheap – rather than making any infantile gesture by snubbing William Street.

And then in about a week-or-so’s time, I up the ante in the pursuit of the big adventure! I hire a camper van for a mere fifty bucks a day all inclusive apart from fuel and the world’s my oyster – well the Blue (see told you I’m not childish) mountains, Jervis Bay, Cairns, The Outback and who knows perhaps fame and fortune beckons as ‘Alligator Glasgow’!

However, what about Sydney?

This is a city and a half, and not just because of its outstanding beauty, its brilliant climate, its marvellous people, and its reasonably priced drink but because right at its heart and soul lies a story of intrigue, cut and thrust, deception and adventure and ultimately heroism that many of us will identify with and many others need to learn from.

Just how in an age of ant-clericalism, specifically anti-Catholicism, did the Church and its adherents not only gain the approval and backing of the Anglican and secular authorities but how did the undercurrents that seen the waves of the 1798 Wexford rebellion and the battle of Vinegar hill resound across the seas to the antipodes? How did these waves eventually result in the emancipation of the Catholic faith through the efforts and faith of convicts, the smuggling of priests into the country to minister to the needs of the Irish community, the whispered underhand conniving of the Catholic hierarchy to allow the means to justify the end, the secreting of the blessed host in laymen’s houses, the humanity of a youthful nation to hold out a hand of welcome to the women in particular who were fleeing the great famine, and the eventual pivotal creation of St Mary’s Cathedral by priests, bishops, and congregation who simply would not give up.

There is a story here that throws back in the faces of those who stayed behind how the principles of respect and justice can create a nation of strength and principle while the motherlands left on the other side of the world carry on their own internecine vindictive war of hatred.

Simply put, the Catholic faith not only was accepted in Anglican Oz but like many other sects and religions that followed it was seen as naturally a good thing and a force for peace and stability, long before it became so in the British Isles! (And even that remains a moot point for some areas!)

And then look around at the towering bridges and buildings that were conceived, designed and built by convict, soldier and settler in an alliance that they all knew was vital if they were all to survive and prosper. A society that from the outset recognised that it was a man’s abilities, ideas, ambition and application that made him what he was and rejected the false straitjackets of his school, his prejudices, his bloodline and his misfortune.

This country, so young still in years is a millennium ahead of our own islands in culture and maturity. There is so much to be learned and so much to be taken from a people who whatever their roots are comfortable in the clothes that they now wear, ambitious in their vision and confident in their ability to achieve it!

Yes of course there are issues, but issues that as a country Australia recognises and is addressing. If they fail it will not be for the want of trying.

There is a song from a few decades whose lyrics go ‘I come from the land down under’.

Well ‘I come from the land up over’ and in that land that has given so much to the world in inventiveness, ideas, culture and industry, but one that still cowers in the thrall of mediaeval sectarianism, administered within and without by governments who are terrified to deal with it in case they lose votes, served by a press who ignore it unless it affects their circulation.

A country who sits within a union that still pays an irrational subservient tithe to the bastard institution of an even more sectarian ‘royalty’ and refuses to accept that all men are born equal.

A country that puts a face of pretending to welcome other people, while conveniently ignoring the truth that we are too busy brandishing the cudgels of bigotry or fending off their swingeing blows, to be concerned about others as they become part of our society.

I heard a joke the other day. Clever and funny in its structure and delivery but less so in its not-so-hidden truth.

An Indian salesman is walking along the banks of the Boyne when he is confronted by a couple of drunk-have-a-go loyalists.

“I am neither, I am from Delhi”

With that they battered the Indian fella silly, spitting their venom at him as they left him on the ground….

“That’ll be Londondelhi ya Fenian B…..”

There is so much more to be said, but I’ll leave you with this.

In the Centre of Sydney there is a monument to those women who escaped the Irish Famine. Their names are recorded on glass windows inset in a wall specially built to commemorate ‘an Gorta Mór ’. 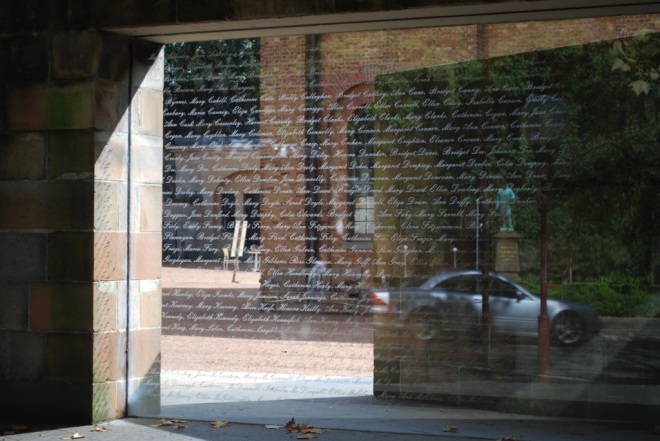 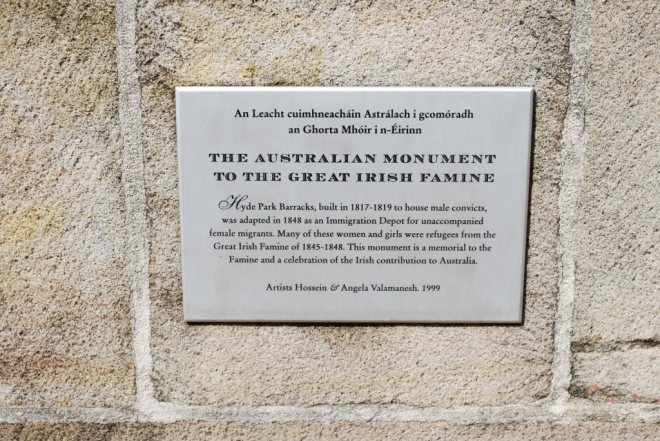 I suppose Scotland’s highest profile equivalent is Celtic Park and until the beginnings of an enlightenment look at just how Scotland’s empty vessels have treated those who created it and their descendants.

If I ever get 12 months spare I will write the whole story, one that Scotland, The six counties, Britain and the world can learn from, one that accepts differences, one that celebrates variety, and one that says it is not about tolerance, it is about respect. This is a story that needs telling! Not in the historic sense of this happened and then he did this and she did that, but in the context of motivations, personalities, hurdles overcome, deals done, visions created, shibboleths destroyed and self-regarding authority disobeyed. It is a human story that will need that year to comprise rainy days and the scouring of the resources of the Mitchell and Dixon libraries..

It is a story that must be written and must be read by a world so intent on ripping itself apart on the back of twisting the true message of faiths.

Think what Scotland has achieved despite this noose of hate that hangs around its neck strangling dreams and smiles. Think how much more would be possible if that noose was removed and the debilitating fear of the trap-door to oblivion was obliterated forever. It is a marvellous story and I am so pleased that I found the ripples still spreading onto the beach as I strolled by.

Having spruiked above, I must admit that an event this afternoon right outside my window has spooked the spruiker!

A majestic white cockatoo, its ruffle a brilliant yellow, was sitting on the tree outside, paring its beak on the branch of the Julabub tree (I made that up, I haven’t a clue what type of tree it is!)when, in trying to get a better picture I managed to startle it and off it soared first up towards the blue sunlit sky and then down towards another patch of greenery across the road. It briefly disappeared from sight only for the afternoon air to be rent with squealing, squawking and the bird equivalent of terrified screaming.

Like a silver streak, the Cockatoo shot back towards the tree near me, pursued by a cutty sark of predatory sea gulls. It crashed through the branches and tumbled to the ground, not quite still, not quite lifeless, but beaten, battered and bloody. By the time I made my way down the five flights of stairs, it had gone; hopefully it had recovered but somehow I think that it was ‘got’. I feel guilty!

So from cockroach (remember Baz) to cockatoo, I don’t bring you indigenous species a whole lot of luck, do I?

Be warned, especially you dingoes, snakes, spiders and crocs. Stay away or you’re for it!

However, and a final however as well, for the moment.

Sydney has the worst system of pedestrian crossings in the whole universe!!